Home > Things to do > Parks and Open Spaces > Moat Park

Situated in the heart of Dundonald, the Moat Park offers idyllic walks around the historic Motte as well as provides a valuable link to shops in the village.  Close by stands the Church of St Elizabeth which dates from 1306, providing an interesting piece of history passed the Doric style mausoleums during your walk.

Moat Park is a green oasis within the expanding townland of Dundonald. It is covered in rough grasses which shelter a range of flowering plants such as Tufted Vetch, Yarrow and Meadow Vetchling. In the summer a variety of insects are attracted to the grassy slopes including Common Green Grasshopper, Small Tortoiseshell Butterfly and the Silver Y Moth.

The short grassland which occurs throughout most of the park provides valuable foraging habitat for birds such as Blackbirds, Starlings and Rook, all of which visit to feed on the earthworms and insect larvae present in the soil. It is also an important habitat for fungi such as The Deceiver.

The many trees in the park provide a range of important habitats for insects, bats and birds. In the winter months the tiny Goldcrest, our smallest native bird at only 9 centimetres in length and weighing the same as a 20-pence coin, can be seen and heard foraging among the trees together with Blue, Great and Long-tailed Tits and the very colourful Goldfinch.

During very cold winters the Waxwing – an unusual bird found in the forests of Northern Europe – is forced to migrate to milder climates to find sufficient food to survive. Many of the large Cotoneaster trees which occur throughout the park provide a bountiful supply of red berries for this bird during harsh winters.

Small streams flowing through the park carry water originating from the Craigantlet Hills to the north. They provide ideal habitat for the Common Blue Damselfly, which can be seen patrolling up and down the streams for prey during the summer months. Bramble (Blackberry) and Wild Raspberry can be found growing on the stream banks. Both provide a sugar-rich food source for many birds and insects in late summer.

The Wildlife Garden has been created to attract a greater variety of plants and animals into the park by creating important micro-habitats where they can thrive.

The garden provides a resource for the community where people can learn how the wildlife-friendly features of the garden are managed to benefit biodiversity, and help to record the plants and animals that live in the garden.

The garden also demonstrates a variety of ways in which we can all attract and help wildlife – for example by creating a pond, planting a native species hedge, building bug hotels and leaving areas of grass uncut where wild flowers and insects can thrive.

As urban areas like Dundonald continue to grow, green spaces such as Moat Park and the Wildlife Garden become increasingly more important habitats for plants and animals which might otherwise lose their home as houses and offices replace fields, hedges and woodlands.

Lisburn & Castlereagh City Council is proud to be part of the ‘Edward Bruce 700 Heritage Trail’, an initiative put forward by the Ulster Scots Agency to commemorate shared Ulster-Scottish history.

The Edward Bruce Commemorative Boulder, which is made of Mourne granite was unveiled at Moat Park by Councillor Tim Morrow and Catriona Holmes from the Ulster Scots Agency.

The brief inscription on this commemorative boulder details the significance of this location in Dundonald.  A church, fort and moat were constructed in the 12th century by the Anglo-Normans.  During an invasion by Edward Bruce of Scotland from 1315-1318 the church and fort were destroyed.  The Moat remained after the battle and today can be accessed through routes in Moat Park and along the Enler River. 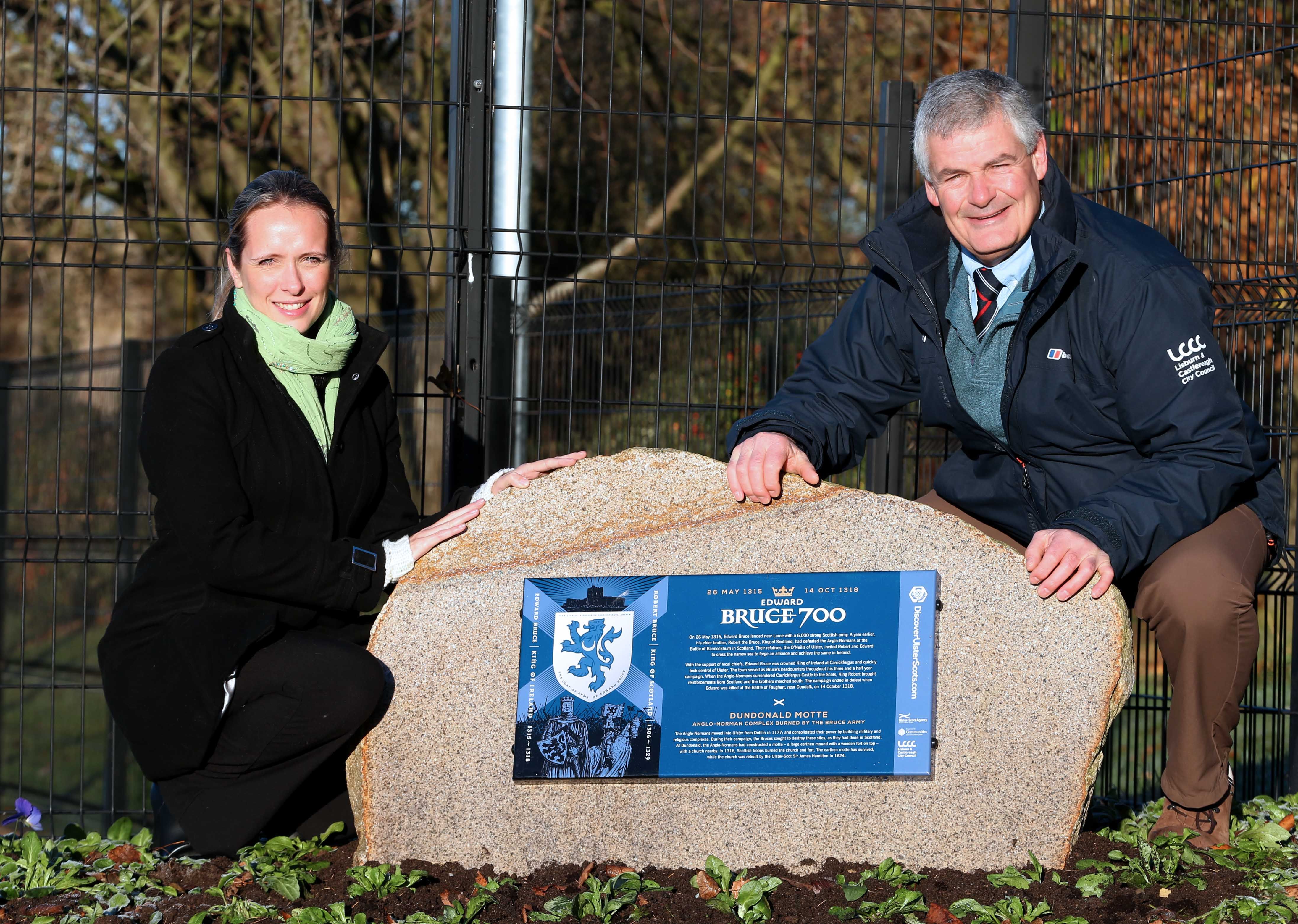