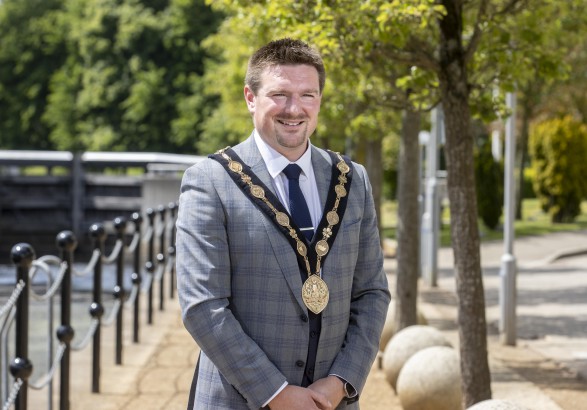 As Mayor, Councillor Carson may sit on all Council Committees and also chairs Monthly Meetings of the council which normally take place on the last Tuesday of each month.

The Mayor can be contacted at the Mayor's Office at Lagan Valley Island by telephoning the Mayor's Secretary on 028 9244 7331 or by email on mayors.secretary@lisburncastlereagh.gov.uk

Ceremonial position of the Mayor

• The individual holding the office of Mayor shall have precedence in all places in the City of Lisburn, except in the company of Royalty or the Lord Lieutenant who would then take precedence.
• The Mayor shall remain impartial on controversial subjects particularly regarding religious or political matters.
• The Mayor will take the lead in all civic matters of concern in the life of the City of Lisburn & Castlereagh.
• The Mayor will receive guests and preside at any civic banquets or similar functions held by Lisburn & Castlereagh City Council.

Invitations to the Mayor

The Mayor is a representative of all the residents of the Lisburn & Castlereagh area. During their term of office therefore, the Mayor will not accept any engagements that may compromise this position. The Mayor is always happy
to attend functions when invited and will endeavour to include as many engagements as possible into his schedule. This can be aided by organisations giving as much detail as possible to the Mayor’s Secretary on any
event the Mayor is invited to.

On occasions, when the Mayor is unable to attend functions, the Mayor’s Secretary may arrange for the Deputy Mayor to attend in place of the Mayor. In view of the Mayor’s busy schedule, it is important that invitations are sent to his Secretary well in advance of the date of the engagement, preferably in writing.

When the Mayor accepts an invitation, the organiser of the event or a designated person should meet the Mayor on arrival and accompany him throughout the event.
• The Mayor’s correct title is “The Right Worshipful the Mayor of Lisburn & Castlereagh City Council, Councillor Scott Carson.”
• After initial introductions, it is correct to address the Mayor as “Mr Mayor."
• As the first citizen of Lisburn & Castlereagh City in any formal seating arrangements (dinners etc), the Mayor should be seated on the immediate right of the host or chairperson. This only varies if a member of the Royal Family or the Queen’s Representative is present - they would be given precedence over the Mayor.
• It is important, when inviting the Mayor to any function, to make it clear what his role is to be and why he has been invited to the event. When speeches are made, the Mayor should be addressed first.