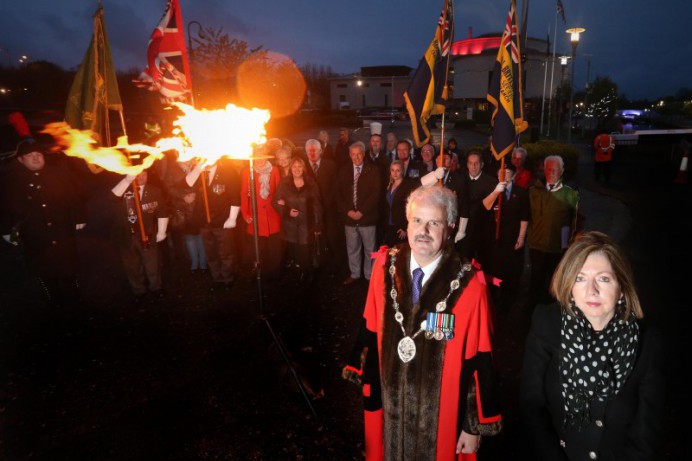 Lisburn & Castlereagh City Council has joined with the Lisburn Branch of the Royal British Legion to remember VE Day; when peace was restored in Europe after six years of war.

In recognition of the 70th Anniversary of VE Day, the Mayor, Councillor Thomas Beckett, and the Lisburn Branch of the Royal British Legion, with Elected Members of Council and the Council’s Chief Executive, Dr Theresa Donaldson, held a short beacon-lighting ceremony.  The beacon is situated in the grounds of Lagan Valley Island.

The Council’s Headquarters, will also be lit up red to mark VE Day over the three-day Anniversary period which runs from 8th to 10th May.

The Right Worshipful the Mayor, Councillor Thomas Beckett, said: “It is appropriate that the Council joins with towns and cities across the United Kingdom to solemnly remember the fortitude, courage and efforts of those who fought for peace and freedom and to mark VE Day.

“We welcome this important Anniversary and what it signifies.  This is the celebration of peace; which was hard-fought and which saw much sacrifice. Those who joined the war effort, who were involved in active service are honoured for their courage.  The contributions of men and women who worked to produce food supplies, uniforms, munitions, medical support: those who worked in agriculture, those in factories and shipyards are remembered for their sacrifices.

“Northern Ireland made much contribution to the War Effort.  The establishment of airfields at Maghaberry and RAF Long Kesh saw servicemen and women come to Lisburn and many lives here were changed forever during the six long years of war. Castle Gardens was home to an Air Raid Shelter and Castlereagh, alongside neighbouring Belfast, was witness to the air-raids, which destroyed homes, buildings and strategic targets.

“I am very pleased that the Royal British Legion stood with us as the beacon was lit. Knowing that hundreds of beacons across the United Kingdom were lit at the same time; depicts the continuous importance of VE Day,” the Mayor concluded.