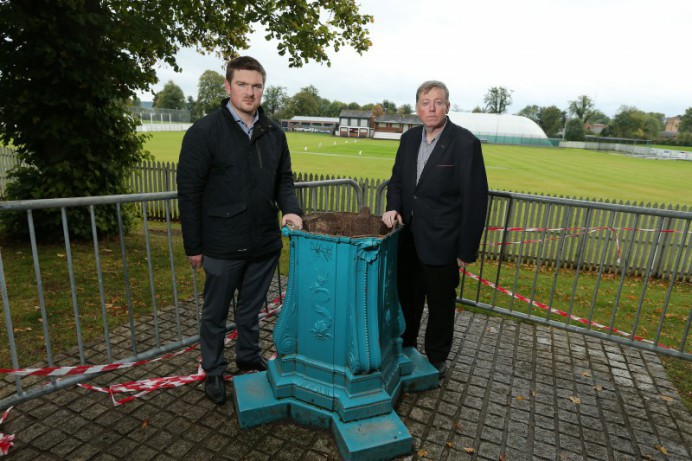 Alderman Paul Porter, Chairman of the Council’s Leisure & Community Development Committee has hit out at vandals who damaged a historic French cast iron drinking fountain at Wallace Park in Lisburn over the weekend.

He said, “I am deeply saddened by this appalling case of vandalism which took place over the weekend.  The fountain represents a significant piece of history which dates back to 1872 when Sir Richard presented 50 of these fountains to the City of Paris to commemorate the end of its siege during the Franco-Prussian War. The fact two of these fountains were displayed in Lisburn was a great honour for the people of the City therefore it was terrible news to learn that the fountain at Wallace Park had been damaged in what can be described as a senseless act of anti-social behaviour.

“Due to the integral and unique design of the fountain, the Council is currently assessing the damage to identify a course of remedial works which will hopefully see the fountain restored to its former glory and back to its rightful place at Wallace Park as soon as possible.  The Council is also reviewing security at the Park and working with the PSNI to help bring those responsible to justice,” concluded Alderman Porter.

Councillor Scott Carson, Chairman of the Council’s Policing and Community Safety Partnership added, “This act of destruction on a historic artefact was motivated by nothing more than a desire to carry out an act of wanton vandalism in a public space.  This behaviour is totally unacceptable and I would urge anyone who has any information in relation to the incident to contact the PSNI as soon as possible.”