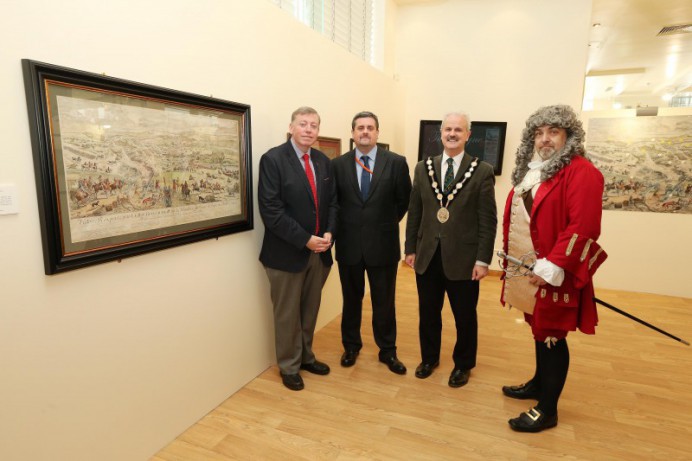 ‘The Boyne’ Exhibition at Museum

Alderman Paul Porter, the Chairman of the Council’s Leisure and Community Development Committee hosted a reception in Lisburn Museum to open a special exhibition to mark the 325th Anniversary of the Battle of the Boyne in July 1690.  In attendance was the Mayor, Councillor Thomas Beckett, other Members of Council and invited representatives of the Orange Order.

The exhibition focuses on Lisburn during the Irish War of 1689-91 when it was occupied by the Jacobite army and then recovered by the Williamite General, the Duke of Schomberg.  He chose the town for his headquarters in the winter of 1689-90.  In June 1690 William III landed at Carrickfergus and came to Lisburn to unite his army with Schomberg’s troops.  William took refreshment with Lieutenant General Douglas in the house of the Quaker George Greigson in Market Square before moving on to review his troops at Blaris and stay overnight at Hillsborough Fort.  From there William organised his march south to give battle with James II at the River Boyne.

A special feature of the display is the Museum’s first showing of an original etching printed in 1691 showing the battle in progress.  It is the work of Theodor Maas, a Dutch artist employed by William III and recently acquired by the Museum.

Alderman Porter speaking at the event expressed his pleasure at seeing the Museum exhibition and said ‘The Boyne was one of the most significant battles in European history.  William III’s victory secured the Glorious Revolution and the Protestant Ascendancy in eighteenth century Ireland.  It rightly continues to be commemorated by the Orange Order but can be understood by everyone as an historic event of high drama and importance to our shared history’.

The Mayor, Councillor Beckett in welcoming all present also commended the exhibition which he hoped would promote understanding of the battle and draw visitors to the Museum and Market Square.  He said, ‘I would encourage anyone with an interest in history to take time to view this special display’.

The Museum’s Battle of the Boyne exhibition continues until the end of August 2015.  It is open to the public with free admission Monday to Saturday 9.30am to 5.00pm.  For further information please contact the Irish Linen Centre & Lisburn Museum on 02892 663377.