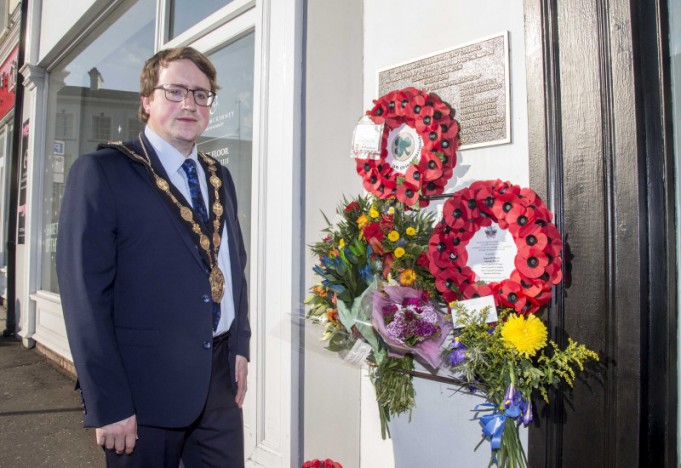 This evening Lisburn & Castlereagh City Council commemorated the lives of six soldiers murdered in 1988 after participating in the Lisburn Half Marathon.

Mayor Councillor Nicholas Trimble was joined in Market Place by Lieutenant Colonel C. M Wood, Commanding Officer of NI Garrison Support Unit; Chief Executive David Burns and a representative from both the Lisburn Branch of the Royal British Legion and the Royal British Legion Riders Branch. A wreath in memory of the lost soldiers was laid at the memorial plaque by each organisation.

The Mayor, Councillor Nicholas Trimble reflecting on this atrocity, said: “The attack 32 years ago is an event our city will never forget. These six brave soldiers were murdered by the IRA, who had planted a bomb on the soldier’s vehicle while they were participating in the charity Fun Run. It detonated as they returned to Thiepval Barracks, killing all six and injuring eleven others. It was a senseless attack and truly was a dark day for our close-knit community. We have a duty to mark this tragedy annually and pay our respects to those brave soldiers who lost their lives on a warm summer evening. This year we are unable to commemorate as fully as in previous years but I am humbled to lay a wreath to honour these soldiers’ lives on behalf of the council.

“I also offer my deepest sincerities to the families of those who died; and acknowledge those who were deeply affected by the destruction of this attack.  Lisburn & Castlereagh will continue to remember the lives lost on 15th June 1988 and the impact this tragedy had on the thousands of people who were in Lisburn that evening,” said Mayor Councillor Nicholas Trimble.