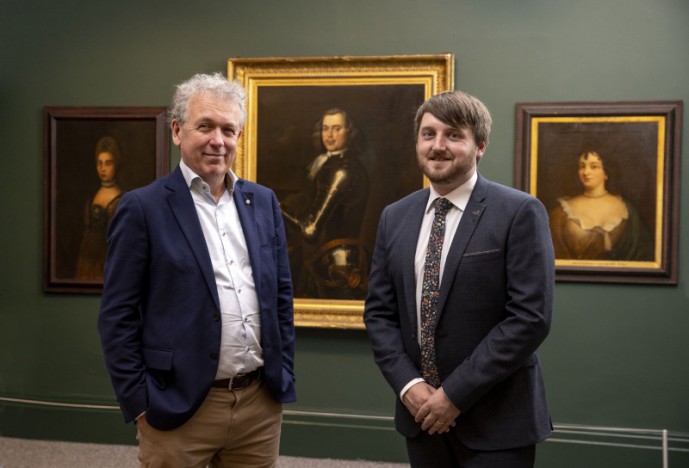 Three portraits of the Rawdon family are now on display at the Irish Linen Centre and Lisburn Museum.

It has been over 350 years since the portrait of Sir George Rawdon has been seen by the public. It is part of a new exhibition, ‘Rawdon: an Irish Family Dynasty’ which opens on Friday 5th August. He is displayed alongside a portrait of his wife Dorothy Rawdon, daughter of 1st Earl Conway, Lisburn’s 17th-century landlord.

It is rare to find portraits of provincial, 17th-century figures such as Dorothy Rawdon, and her later relative, the socialite, patron and antiquarian, Elizabeth Hastings, Countess of Moira. The museum is delighted to be able to mount the three portraits side-by-side.

The Irish Linen Centre and Lisburn Museum recently acquired these three significant portraits of the Rawdon family dating back to the 1660s.  This was possible due to the generous support from The National Lottery Heritage Fund and Lisburn & Castlereagh City Council.

Councillor Aaron McIntyre, Leisure & Community Development Chairman, said: “It is great to see part of our local shared history returning after over three centuries.  The Rawdon family has links across this island from Lisburn, Moira and Ballynahinch, in Northern Ireland, to Dublin City.

“Sir George Rawdon played a key role in developing Lisnagarvey, later Lisburn.  He laid out our city streets, founded the weekly market and developed local industry. He also had a pivotal role in establishing Moira as a town where he had a house, as well as one in the Co. Down town of Ballynahinch.

“He is buried in Lisburn Cathedral, and his influence on 17th-century Lisburn and its growth as a provincial town cannot be overestimated. I would encourage our residents to visit this exhibition and learn about this historic family.”

Dr Paul Mullan, Director, Northern Ireland at The National Lottery Heritage Fund said: “It is fantastic news that thanks to the National Lottery players, we have been able to support Lisburn Museum in securing the Rawdons’ return. These portraits of influential and historically significant men and women in the city’s history will be on public display and preserved for years to come, meaning that local communities and visitors can learn more about the rich heritage of Lisburn and beyond.

“It’s a must see, free exhibition that is part of our #HeritageIsOpen summer campaign and would encourage anyone with a curiosity about their local heritage to visit the exhibition.”