Home > News > Show Your Support for the Armed Forces 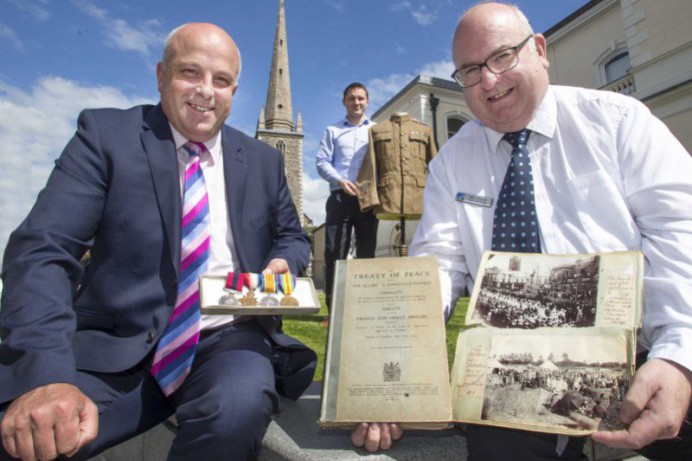 Show Your Support for the Armed Forces

Lisburn Castlereagh is proud to host the regional Armed Forces Day celebrations on Saturday 22nd June in the city centre.  As part of these celebrations the council has arranged a variety of activities in Wallace Park that will appeal to our residents and visitors.

In advance of Armed Forces Day, Lisburn & Castlereagh City Council will raise the Armed Forces Day Flag at its civic headquarters on Friday 21st June.  There will also be a short concert by the Band of the Royal Marines in Market Square at 1.30pm.

Saturday 22nd will commence with a parade at 10.30am of serving personnel, cadets and veterans accompanied by regimental bands through the city centre to Wallace Park for an afternoon of activities.  This includes: parachute displays, a Drumhead Service, a military village, acts on stage from Peter Corry, the Red Hot Chilli Pipers and the Military Wives Choir.  The final item in Wallace Park will be a Beating Retreat by the Band of the Royal Marines at 5.15pm.

The ‘Peace Day, 1919: Living and remembering in the aftermath of the Great War’, a major new exhibition in the Irish Linen Centre & Lisburn Museum opens at 12 noon on Saturday 22nd June.

Speaking about local Armed Forces Day celebrations, Alderman James Tinsley, Chairman of the council’s Leisure & Community Development Committee said: “The council demonstrated its commitment to the armed forces through the signing of its Armed Forces Covenant; and to host the regional annual parade this year is great news for the city.  After the parade there will be activities in Wallace Park to be enjoyed by everyone and we look forward to seeing a busy park throughout the day.  The Band of the Royal Marines will also make a trip back to Market Square on Saturday for a short 30 minute concert starting at 2.30pm.

“I would also encourage people to visit our exhibition in the Irish Linen Centre & Lisburn Museum which features medals, uniforms, artefacts and photographs from its collection to explore Peace Day celebrations.  Peace Day was held in Lisburn on 16 August 1919, and the town held a huge civic parade and reception to honour ex-servicemen, while a temporary cenotaph in Market Square honoured the war dead.  The day was remembered as one of the ‘greatest in Lisburn’s history’. As part of the exhibition we have recreated a temporary cenotaph and memory wall; and we encourage you to record your views, thoughts or family memories of the Great War.”

The new exhibition is open from Monday – Saturday 9.30am – 4.30pm in the Irish Linen Centre & Lisburn Museum from 22nd June until November.

For more information on Armed Forces Day please log on to www.lisburncastlereagh.gov.uk/AFD2019 or follow the council’s social media accounts.