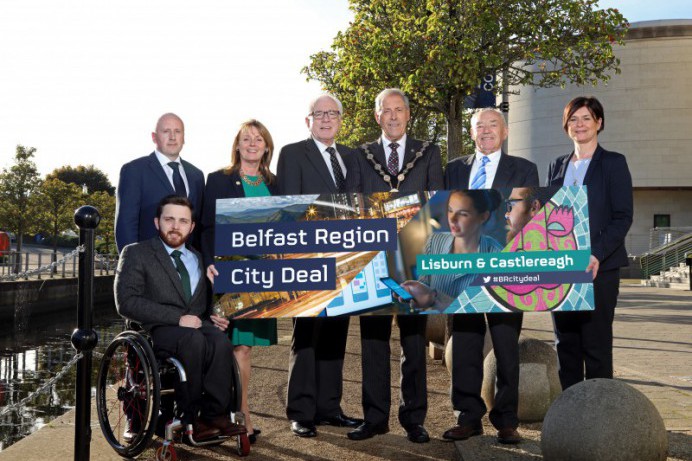 A delegation from Lisburn & Castlereagh City Council travelled to London today (24th) to represent our area at a specially arranged regional Westminster Reception, designed to showcase the once in a generation Belfast Region City Deal  to prospective stakeholders and influencers in Great Britain.

This first of its kind City Deal in Northern Ireland aims to deliver £1billion of co-investment, from both the public and private sector, and create over 20,0000 new and better jobs over a 10 year programme.

Six local Councils, including Lisburn & Castlereagh, as well as our two universities and further education colleges have been working together for the past six months to bring together an ambitious collaborative programme of investment in the areas of digital innovation, infrastructure, tourism led regeneration and employability and skills. 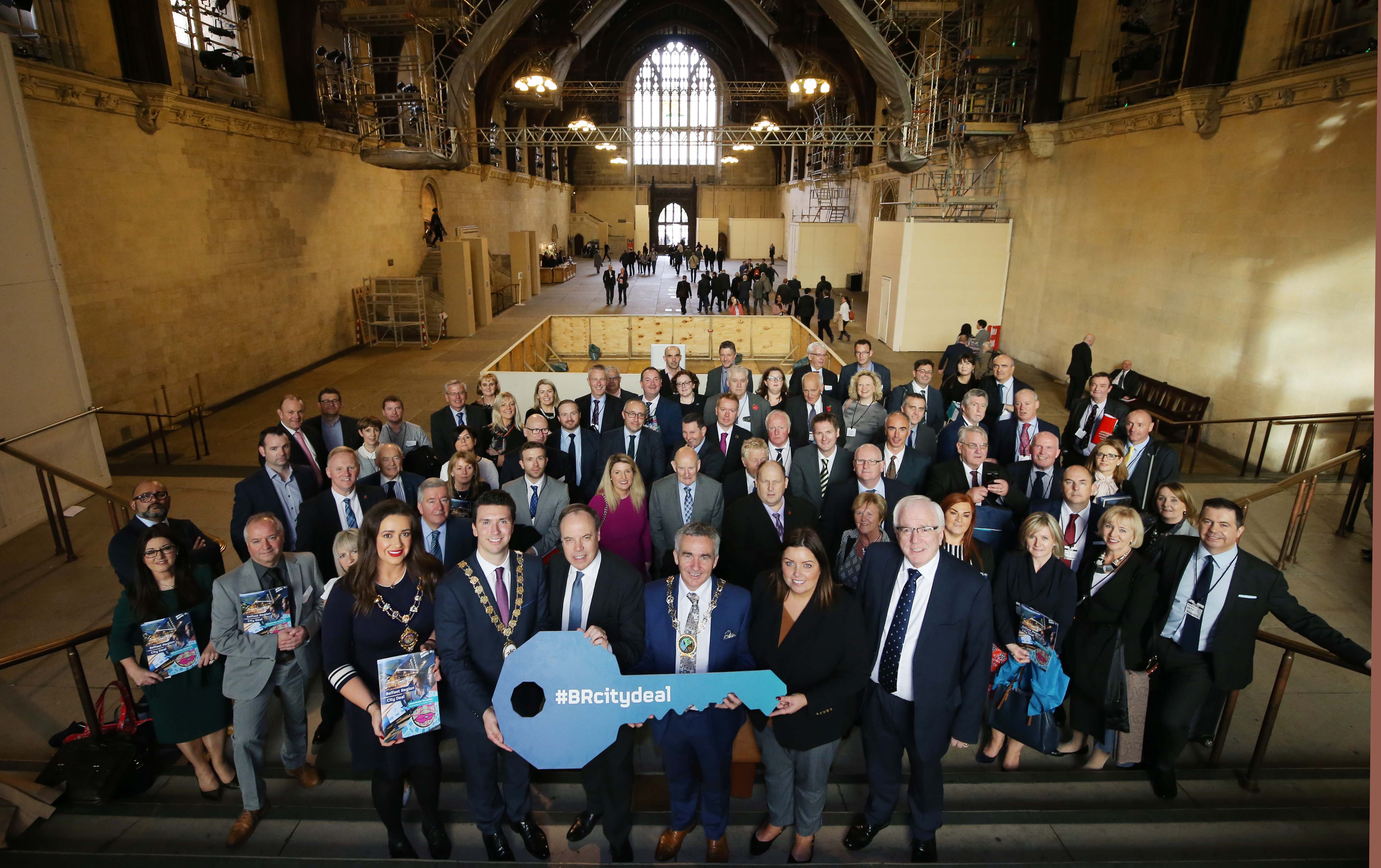 The Lisburn and Castlereagh Delegation at Westminster with its Regional Partners. 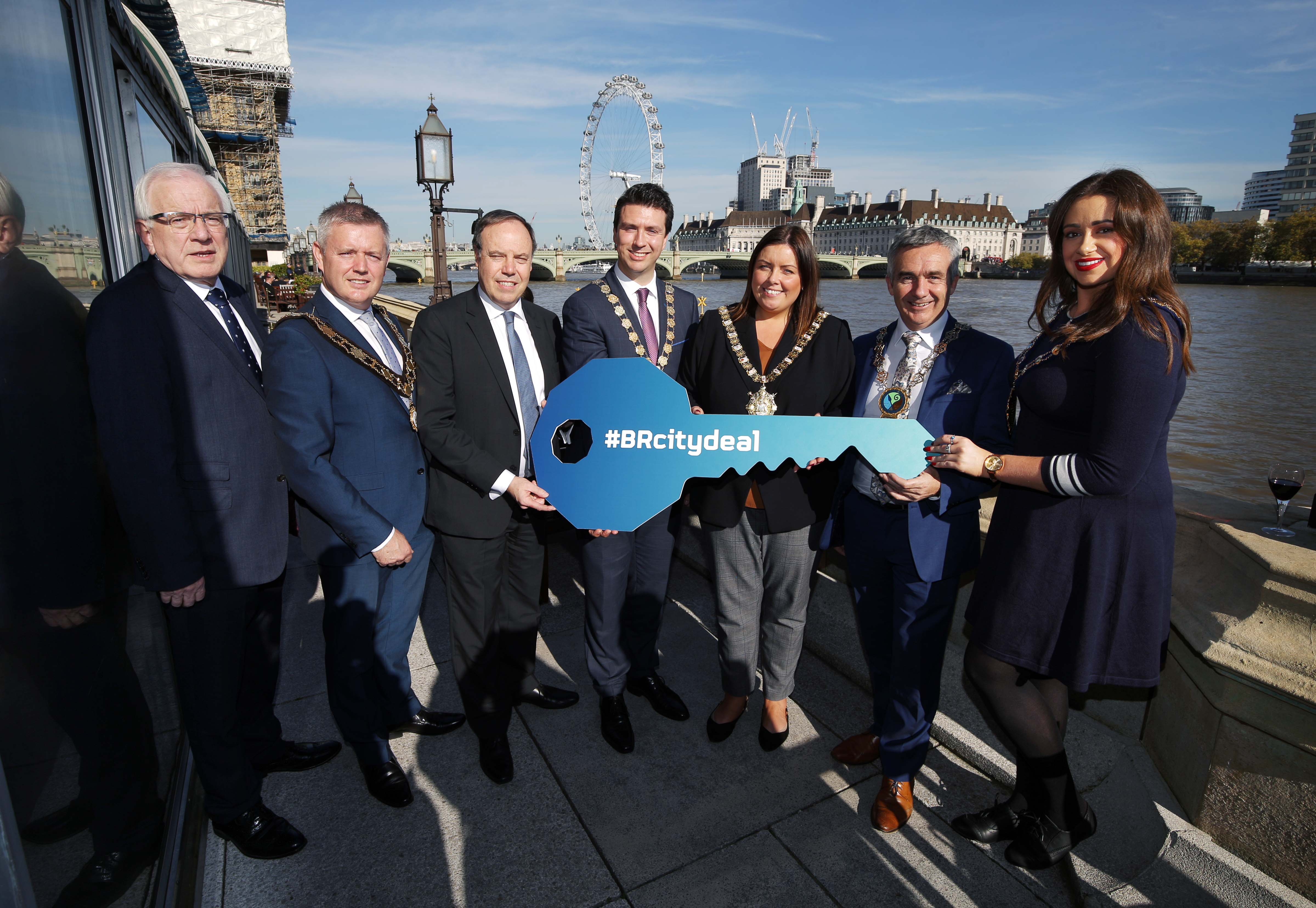 Partner councils at #Westminster today as the #BRCitydeal was showcased with the once in a generation Belfast Region City Deal to prospective stakeholders and influencers in Great Britain.

Local projects submitted in the bid include the Hillsborough Tourism Master Plan, in conjunction with Historic Royal Palaces, which will build upon planned investments at Hillsborough Castle, Fort and Forrest to create a world class heritage attraction.

In partnership with the South Eastern Regional College, plans have also  been developed for a leading edge Innovation Hub, creating an E-SERC Centre for Excellence in Innovation and Entrepreneurship.

In addition the City Deal submission includes a proposal for the second phase of the Belfast Rapid Transit system which will present significant economic opportunities for the Council.

These projects are expected to create £50 million over the Deals’ lifetime for our local area, in addition to the significant economic opportunities and spin offs for the Lisburn Castlereagh area associated with the other regional projects submitted from across the partner council areas.

Councillors will today be joined by the local MP, Sir Jeffrey Donaldson, as well as representatives from SERC and the local business community including McGreevy Engineering, Assa Abloy, The Tower Group and Hinch Distillery at Westminster, bringing together  key decision makers from government, House of Commons, House of Lords, The NI Assembly, universities, further educations colleges and the wider business sector across Northern Ireland.

Speaking as the Council Delegation set off, the Deputy Mayor, Councillor Amanda Grehan said: “Today is the next step towards securing a successful City Deal for our region and, along with our partners, we will be doing all we can to negotiate the best possible deal for the Region.  The delivery of our local projects, within the City Deal bid,  combined with the initiatives  of our partners in neighbouring Council areas will ensure a successful outcome for both Lisburn & Castlereagh  and  Northern Ireland PLC in terms of jobs, visitor numbers, innovation and investment,” said Councillor Grehan.

It is anticipated that an announcement will be made in the Autumn budget on Monday 29th October.

For more information go to www.belfastcity.gov.uk/belfastregionalcitydeal