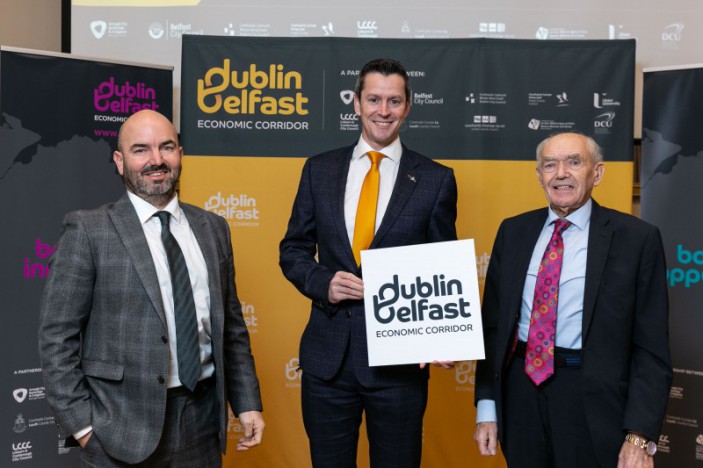 Push to boost economy between Dublin and Belfast gains momentum

Cllr Pete Byrne from Newry, Mourne and Down District Council in Northern Ireland was elected as Chair of the Dublin Belfast Economic Corridor (DBEC) Oversight Board, a body made up of councillors from the eight local authorities along the corridor. Cllr Seána Ó Rodaigh of Fingal County Council in Ireland was named Deputy Chair.

“At LCCC we have always promoted the benefits of business investment in our area. Local businesses that have operated here for many years have benefited from excellent infrastructure, access to a wealth of talent enabling the creation of innovative workforces, local supply chains and the support of the local communities, government agencies and other partners in Northern Ireland.

“There has already been a lot of cooperation and collaboration going on between councils to ensure we are not only in a strong position to develop existing links at a local level across Lisburn & Castlereagh, but that we can identify new initiatives which can help boost connectivity, enable innovation, generate jobs and foster greater socio-economic growth along the entire corridor. I look forward to continuing on this partnership journey.”

Addressing the Oversight Board’s meeting in County Meath, new Chair Cllr Pete Byrne said: “We have a real opportunity through the work of DBEC to deliver jobs and sustainable growth along what is a major economic pipeline for the whole of the island. There is a rich and diverse range of sectors and a large number of businesses which we can help to grow, be it in Agri-Food, financial services, tourism, high tech manufacturing or construction.

“Importantly, as a joint partnership this will go beyond focussing on the big cities which bookend the corridor and allow us to tackle regional disparities head on by leveraging the existing local government network and resources of the participating partners, as well as encouraging buy-in and engagement from the private sector.”

Deputy Chair of DBEC Cllr Seána Ó Rodaigh said: “Alongside the obvious social and economic benefits of closer cross border collaboration in order to develop the corridor, what we are looking to help drive is greater inward investment, the boosting of trade opportunities for local businesses, increased production in key sectors and higher employment. This will be increasing important as the population along the corridor continues to grow.”

As part of their efforts to develop a regional proposition for economic growth, DBEC has engaged leading consultants KPMG to undertake work which will help deliver a development plan to identify priority areas of cooperation between the councils and what DBEC could look to do to encourage greater economic regeneration across the corridor area.

The partnership also includes Dublin City University and Ulster University who collaborated to produce the report that led to the formation of the group in March of this year.

Currently there are some two million people living in the eight council areas that the economic corridor passes through, however its population is expected to grow faster than elsewhere across the island of Ireland. Predictions are that the total population will reach 2.5 million by 2040, bringing with it a younger and more diverse concentration of people.