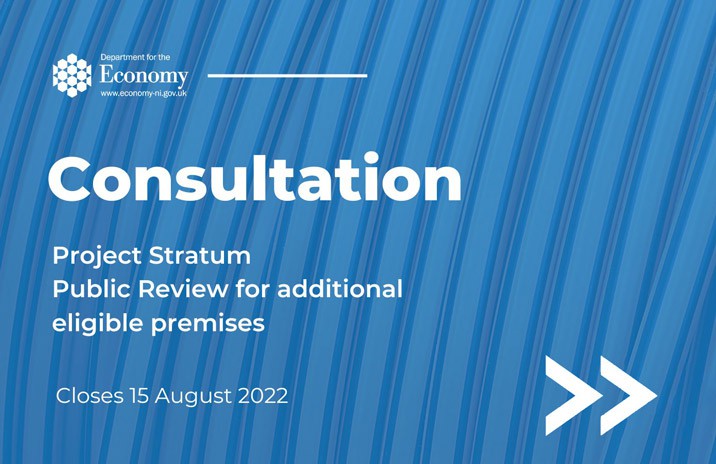 Project Stratum is a broadband intervention scheme managed by the Department for the Economy (DfE), developed to improve connectivity for premises unable to access broadband services of at least 30 Megabits per second.

When Project Stratum deployment concludes in early 2025, it is expected that previously identified eligible premises will be able to access Next Generation Access (NGA) broadband (capable of delivering download speeds of at least 30 Mbps), except for some particularly difficult to reach premises which are surrounded by bodies of water.

DfE now wishes to identify eligible premises to ensure that any cost savings that may arise through Project Stratum, such as removing derelict premises or from other sources, can be used to connect eligible premises that will benefit from an NGA broadband connection.

How can you help?

Please follow the link below to the DfE website where you can view lists of postcodes that have been provided. We invite residents and businesses to review these postcodes and respond as per the advice detailed on the link as follows: https://consultations.nidirect.gov.uk/dfe/discrete-superfast-reconsultation

If you have any questions, please contact the Department for the Economy direct by email at stratum@economy-ni.gov.uk