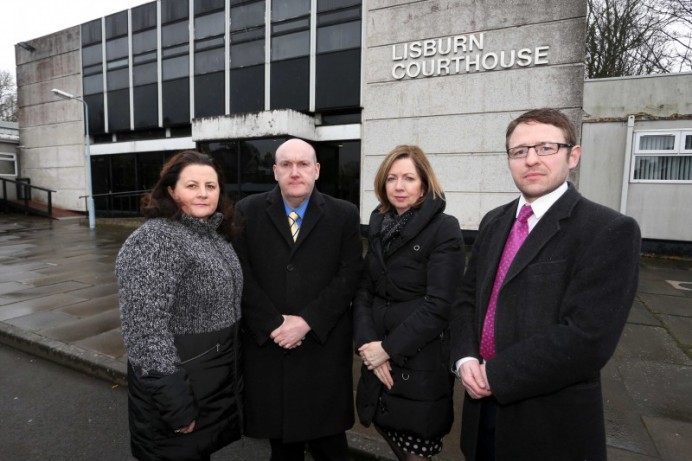 Lisburn & Castlereagh City Council has requested a meeting with the Minister of Justice to discuss his decision to close Lisburn Courthouse, and this has been refused.

Council representatives recently met with Mrs Janice Spence, a well-known solicitor in the Lisburn area, who campaigned for Lisburn Courthouse to stay open.

Lisburn Courthouse is set to close this year, with its cases to be transferred to Laganside Court in Belfast.

Chairman of the Governance and Audit Committee, Alderman William Leathem, raised the closure announcement at the Full Council Meeting of Lisburn & Castlereagh City Council at the end of February.  He said: “I am profoundly disappointed and very displeased that the Minister will not even facilitate a meeting with the Council to allow us to put forward our views.

“I reiterated my views on the speed of the closures decision, given this was announced only days after the consultation ended.  I also brought to the Council’s attention that recorded crime figures had increased in the area by 8.1% from a year previously; from figures from the PSNI in November 2015. However I am glad that the Council is united against this decision.

“We will be making contact with the Minister’s Office to express our annoyance and to again request a meeting so that Lisburn-specific impact matters can be discussed.

Having campaigned vigorously to keep the court house open Lisburn Solicitors’ Association expressed their surprise that the Minster refused to meet with local representatives about such an important matter which affected all of the residents of Lisburn.

“Justice in Northern Ireland is always a controversial matter but there is nothing more controversial than the removal of it from citizens.  We believe that removing the court from the City will have not only the effect of our clients having to travel to Belfast and other courts, sometimes with young children, but will also have the knock on effect of removing police and social workers form the city for hours on end.  Cases heard in Belfast will take local police and social work staff away resulting in what is an already stretched service being pushed beyond breaking point.”