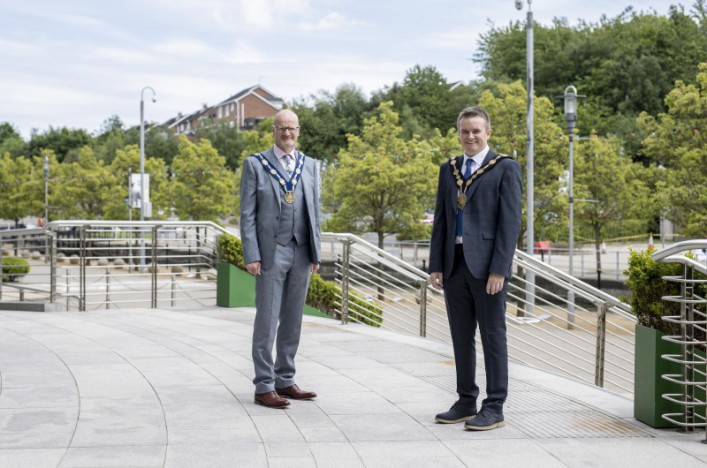 Speaking at the AGM, Mayor Martin firstly paid tribute to all key workers including council staff before thanking his Council colleagues, his wife Joanna and their three young children Emily, Imogen and Hallie for their support.  The new Mayor also pledged to work with Deputy Mayor Mitchell, his wife Michelle and their family for the betterment of the whole community.

Setting out his hopes for the year ahead, Mayor Martin said “Thanks to the commitment shown by so many, there is a real sense of possibility around as we spend much needed time together as family, friends and neighbours. My mayoral theme this year will be ‘Connecting the Dots’ with a focus on including more of those around us in community life.

“Whether you are a parent battling for your kids, a carer unable to take some time for yourself, or a young person who sees the world through a different lens, together we can tackle the epidemic of loneliness that existed in every street across every community long before Covid-19 reached these shores.

"I am committed to opening different doors to change what and how we do things to make life a little better for those who for too long have been passed by.

“For that reason I will support two mayoral charities. One is ADD NI, an organisation based in Carryduff which brings out the best in young people with ADHD – a cause very close to my heart and I will be dedicating as much time as possible to raising awareness around neurodiversity across the City.

“The second charity MACS, who provide services from Longstone Street, here in Lisburn, does fantastic work supporting young people aged six to 25 who haven’t had a fair deal and may be experiencing homelessness, mental health and other issues.

“Finally, I would like to record my sincere appreciation to both Councillors Trimble and Palmer for their considerable contribution to civic life during what has been a particularly challenging year for everyone.  Both put their hearts and souls into leading our community and we owe them a debt of thanks for their efforts.”

Deputy Mayor Councillor Tim Mitchell added: “I am delighted to take up the role of Deputy Mayor and look forward to working closely with Mayor Martin over the next 12 months.”

The following Committees, with Chair and Vice-Chair representation, as appointed at the Annual Meeting are: