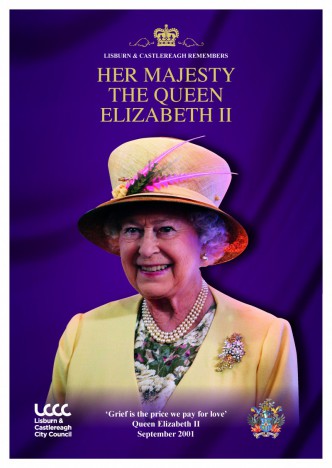 On behalf of the elected members and officers of the council the Mayor said: “I was deeply saddened to hear of the passing of Her Majesty The Queen. I would like to convey our deepest sympathies to the entire Royal Family at this time.

“The Queen has served the UK and the Commonwealth with integrity and grace for over 70 years.  She visited the Lisburn Castlereagh council area on many occasions during her reign.  Her first visit to Lisburn was in July 1953 as part of a three day state visit to mark her Coronation, when she was accompanied by the late Prince Philip.

“The Queen officially opened the council’s civic headquarters at Lagan Valley Island in 2001 alongside Freeman of Lisburn & Castlereagh City, Jim Dillon MBE JP.  She also granted city status to Lisburn in 2002.  In 2021, the council was delighted to have received Royal Status for Hillsborough and in October Royal Hillsborough received its Letter Patent.

“As a regular visitor to Hillsborough Castle, the Royal residence in Northern Ireland, The Queen hosted garden parties and receptions while using it as her base to travel across Northern Ireland.  The Queen is an inspiration to many generations as she has worked with her family to ensure the Monarchy remains progressive and helps to build peace across the world.

“In line with agreed Northern Ireland protocols the Union flag will fly at half-mast from now until the day of The Queen’s funeral across all applicable council facilities. For further information on the special arrangements for Hillsborough village during the official period of mourning please go to www.lisburncastlereagh.gov.uk/resident/council-service-continuity."

Residents can leave a message in one of the Books of Condolence located at Lagan Valley Island or Dundondonald International Ice Bowl or online at https://www.lisburncastlereagh.gov.uk/book-of-condolence-for-her-majesty-the-queen