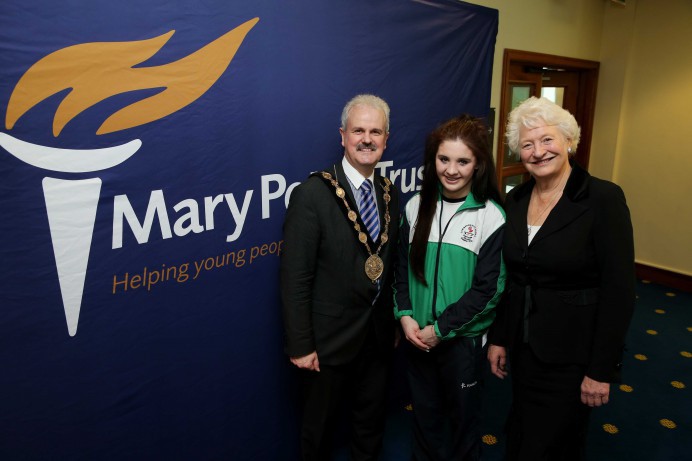 The Mayor of Lisburn & Castlereagh City Council, Councillor Thomas Beckett has officially named the ‘Mary Peters Trust’ as his chosen charity for his Mayoral Term.

The Mary Peters Trust provides support to young and talented athletes across Northern Ireland.  It works alongside Sport NI and, with the assistance of the Governing Bodies of Sport, makes financial awards towards approved out-of-pocket expenses.

Speaking about why he chose this charity; the Mayor said through his work in Lisburn City Council’s Leisure Services Committee he had seen first-hand the dedication and commitment of young athletes across Lisburn and Castlereagh and wanted to be able to help give something back to them for their effort.

“The commitment of today’s athletes is incredible; and I understand the substantial costs associated with competing nationally and internationally, which is why the work of the Mary Peters Trust is invaluable.  The Mary Peters Trust works with athletes to create opportunities and develop their existing skills as they train, through both financial assistance and in an advisory capacity.

“Over the years the Council has had a strong affiliation with Dame Mary Peters CH DBE and I am honoured to be raising money for the Trust in her name.  It has been over 40 years since Dame Mary won a Gold Medal at the Munich Olympic Games and in that time, she has made an outstanding contribution to sport, civic and community life in Lisburn and throughout Northern Ireland.  I look forward to working closely with her charity to benefit local athletes in a wide range of sporting disciplines.  In the last year 25 recipients of Mary Peters Trust grants have been from the Council area.”

Dame Mary Peters CH DBE was delighted that the Mary Peters Trust was chosen as the Official Charity for Councillor Beckett’s Mayoral Term.  Speaking at the launch she said: “I am overjoyed my Trust has been given this opportunity, Thomas as a runner himself knows of the benefits of sport and being the Mayor’s Charity this year means we at the Trust can support more and more young people and help them achieve their dreams.  I am looking forward to working with the new council and want to take this opportunity to send my best wishes to all the councillors as they take up their new challenge.  This will be an exciting and interesting year.”

The Mayor’s Office is keen to hear from any organisations or persons who would like to get involved with the Mayor’s Charity and help to raise funds for the Mary Peters Trust.  Please contact the Mayor’s Secretary on T: 028 9250 9331 or email: mayors.secretary@lisburncastlereagh.gov.uk

“I hope that during my Mayoral Term I will have the support of the whole Lisburn & Castlereagh community to raise both awareness of and funds for the work of the Mary Peters Trust and the important role of our young athletes across the City.  Through fundraising efforts I would like to be able to raise a significant sum, which would help local athletes reach their full potential and success in their chosen sports,” concluded Councillor Beckett.