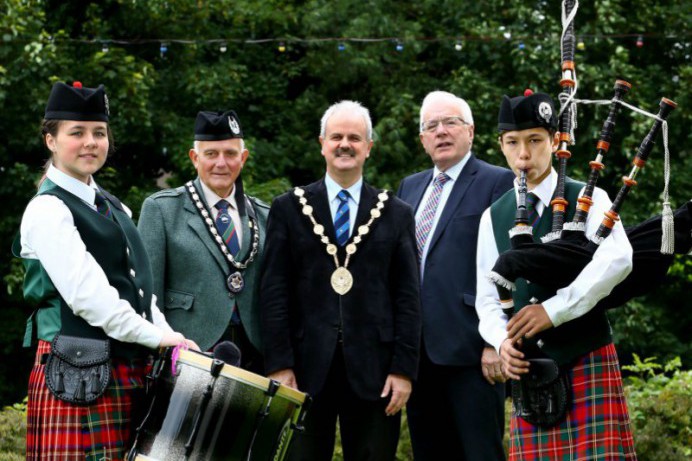 Moira Demesne, located in the quaint village of Moira, will provide the perfect setting for the up and coming Lisburn & Castlereagh City Pipe Band Championships 2015.
Organised in partnership with the Royal Scottish Pipe Band Association Northern Ireland Branch, the glorious sounds of pipes and drums will grace the air on Saturday 1st August when approximately eighty five pipe bands and drum majors will battle it out to be crowned 2015 champions.
There will be stiff competition from across Northern Ireland and Ireland with competitors entering the arena in the hope of first class performances.
Local Pipe Band, Ravara will compete in Grade 1, while Bleary and District Pipe Band from Armagh and the Police Service of Northern Ireland Pipe Band are top contenders in Grade 2. Drumlough Pipe Band from Hillsborough will be hoping for success in Grade 3A as will Ballydonaghy Pipe Band from Crumlin in Grade 4B.
Forty five Drum Majors will also be competing, demonstrating true professionalism and flare as they expertly march and flourish to the beats of pipes and drums. Local Drum Majors competing at the championships include, Melissa Burrows and Laura Hannah from Drumlough Pipe Band and Vikki Singer from McDonald Memorial Pipe Band.
The Mayor of Lisburn & Castlereagh City Council, Councillor Thomas Beckett, will be Honorary Chieftain of the Championships, and will take a salute from all forty five pipe bands as they parade in the Championship Finale at 5.00pm.
Speaking at the Championship launch, the Mayor said, “Lisburn & Castlereagh City Council is delighted once again to be hosting the Pipe Band Championships in partnership with the Royal Scottish Pipe Band Association.
“Whether you are an avid follower of pipe bands or would like a day out with your family, this event is one that should not be missed.
“The sheer spectacle of seeing and hearing hundreds of pipers and drummers is an experience in itself and what can only be described as a musical masterpiece.
“I would like to take this opportunity to extend a warm welcome to all competitors from near and far and I hope you all have an enjoyable day, whatever the result!”
Chairman of the Development Committee, Alderman Allan Ewart also commented, “It is fantastic that the Council will once again host the Pipe Band Championships.
“We are expecting big crowds to descend on Moira Demesne, which not only puts Lisburn & Castlereagh on the events map but lets us showcase our superb facilities.
“The Championships are always a popular family day out so I would encourage everyone to come and enjoy this spectacle and support our local competitors.”
The event caters for the whole family and promises to be a great day out with a fun festival atmosphere expected. Children can enjoy fun and games with rides and amusements and other great activities on site. There will also be a wide range of food and trade stalls to visit.
The Council will also be exhibiting at the Championships to showcase what is going on in and around City. The exhibition trailer will be open from 11.30am until 5.30pm - pop in and see what is on offer!
The competition will start at 11.00am and will run until approximately 5.30pm. Admission is free and car parking is available on site. Disabled parking is also available to blue badge holders.
For further information, please contact the Royal Scottish Pipe Band Association Northern Ireland Branch on 028 9267 0445 or visit www.rspbani.org
Previous Next