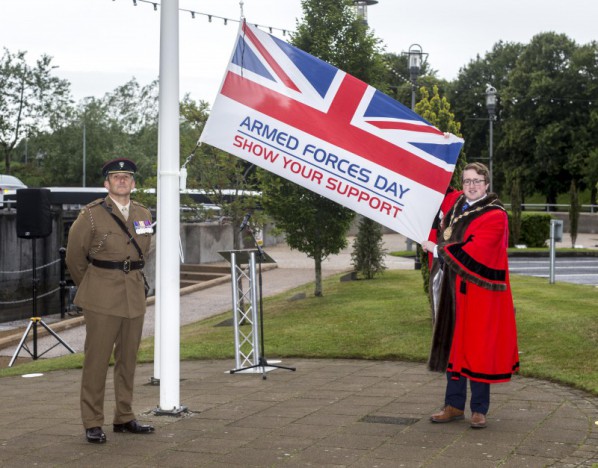 Today’s ceremony may have been smaller than previous years, but the council was honoured to host a ceremony to recognise Britain’s Armed Forces of the past, present and future.

Addressing guests the Mayor said: “As we raise the Flag this morning, we do so as a sign of respect and gratitude.   We are extremely proud of our long established history with the Armed Forces in our city.  Lisburn has been home to Thiepval Barracks, the Army Headquarters in Northern Ireland, for over 80 years. Service men, women, and their families have lived side by side with our residents as neighbours, colleagues, classmates, and friends.

“By flying the Armed Forces Flag at our civic headquarters, the message to residents and visitors is that Lisburn Castlereagh appreciates the dedication and achievements of all our service personnel, and supports the men and women who make up the Armed Forces community including veterans, service families and cadets.  Today is a time to reflect on the service of our military men and women and their families and acknowledge our deepest gratitude to them.”

The Mayor invited Lieutenant Colonel Wood to raise the Armed Forces Flag, which was followed by a two minute silence.

Armed Forces Day takes place this year on Saturday 27th June with virtual events scheduled given the current government restrictions on mass gatherings.  As the council last month celebrated the 75 Anniversary of VE Day virtually it understands the need for local authorities across the UK to adapt their plans at this time.