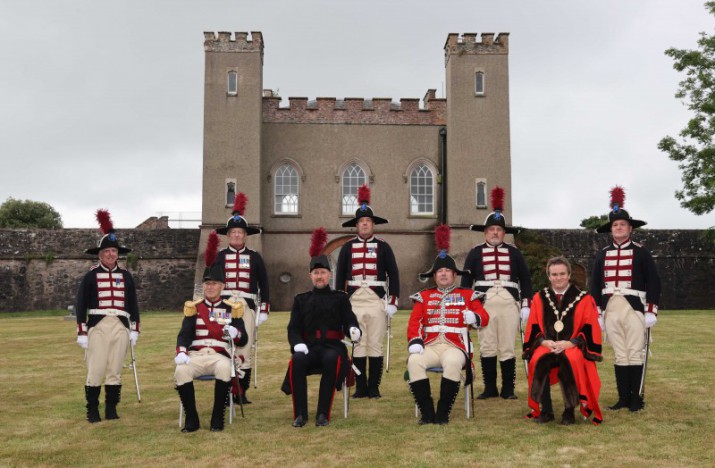 The Mayor together with council representatives were delighted to be part of the ‘Hillsborough Fort Guard’ warrant ceremony today (Saturday 31st July).  The investiture is a prestigious event particularly in advance of receiving the Letters Patent for Royal Hillsborough later this year.

Today marked the first time in over a century that an official event to establish Fort Warders at Hillsborough Fort has taken place. It is a welcomed revival of a tradition that will bring the sight of Fort Warders in their navy tunics, white breeches and black bi-corn hats back to the village.  The Bugler wears a scarlet tunic and will once again sound the call to be answered by the Warders of Hillsborough Fort.

Elected Members attended the ceremony at which Nicholas Hill, 9th Marquess of Downshire presented the six new warders of Hillsborough Fort with their official Warrants of appointment.  The Marquess is the first Constable of the Fort in over 100 years to exercise the privilege which was granted to the Hill family in 1660 by King Charles II.  The 7th Marquess of Downshire retained the solitary post of the Fort Bugler which has been proudly held by Andrew Carlisle since 2006.

The Mayor of Lisburn & Castlereagh City Council, Alderman Stephen Martin, speaking about the ceremony said: “It was an honour to be part of today’s historic event.  Today’s event will be one of many memories I will have in the run up to the receipt of the Letters Patent later this year.  Once we have received this our charming village will become known as Royal Hillsborough going forward.

“On 21st December 1660, King Charles II granted a Royal Charter to the Fort at Hillsborough.  Within it the title of hereditary Constable of Hillsborough Fort was granted to Colonel Arthur Hill, his heirs and assigns.  In 2021, Her Majesty The Queen (1st cousin to King Charles II nine times removed) granted Royal Status to Hillsborough Village.  The connection of this Georgian village to the Royals goes back centuries. We look forward to receiving the Letters Patent and working in partnership with the local community, businesses, Hillsborough Fort Guard and Historic Royal Palaces to mark the name change of this popular and historic village.”

Bugler Andrew Carlisle who has ' held the Fort' on his own for the last 16 years, after the ceremony added: ''What has taken place here today will safeguard this unique tradition for hopefully many years to come. Once more the sight of the Warders in and around the village will be a common sight and will encourage folks to find out more about the fascinating history of the Guard.

“We are entering a very historic year ahead, the conferring of the Royal title to Hillsborough and Her Majesty's Platinum Jubilee. Both unique events, that the Hillsborough Fort Guard are looking forward to celebrating and bringing a splash of colour to the Royal village of Hillsborough.''

Mayor Martin, speaking about the ceremony concluded said: “Many people will know of the work of the Hillsborough Old Guard which was formed in 2005 to preserve, promote and document the rich local history of the area. Today is a special day for many of those who have been involved with the group many years. Thanks to them, a tradition once nearly lost has been proudly restored which is timely in the run-up to receiving of the Letters Patent for what will then be known as Royal Hillsborough hopefully later this year. It was a real honour to participate and bear witness to the culmination of many years of faithful dedication by those now part of the Hillsborough Fort Guard.”