Home > News > Hand of Friendship With Warrington Honoured by Statue 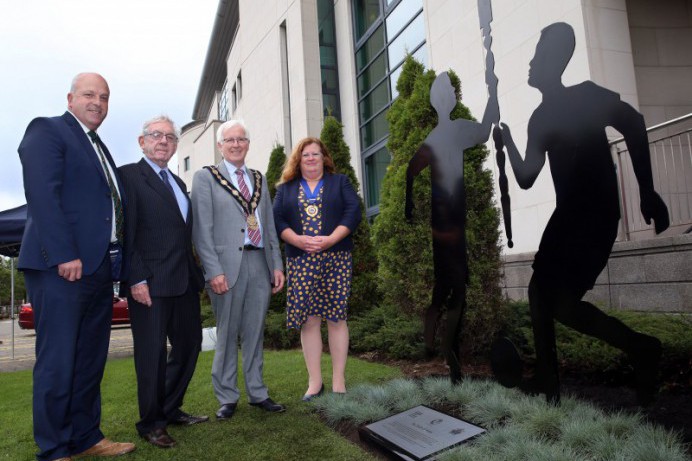 Hand of Friendship With Warrington Honoured by Statue

A statue was unveiled today at Lagan Valley Island to recognise the 25 year friendship of Crewe United with Warrington following the bomb atrocity in 1993, which took the lives of two young children aged 12 and 3.

The statue is a silhouette of two young people holding the ‘Torch of Hope’ with a football at their feet to depict Tim Parry and Johnathan Ball and the ‘Challenge Peace Cup’, which is played annually between Crewe United and Warrington Town.

Alderman James Tinsley, Chairman of the council’s Leisure & Community Development Committee, unveiling the statue alongside Tom McKenna, Chairman of Crewe United, said: “It is an honour to publicly acknowledge Crewe United, which was the first group to visit Warrington after the explosion to pay respects to those killed and injured.  Its relationship since then has grown beyond the club to include Lisburn & Castlereagh City Council and Warrington Borough Council.

“The council is proud of the spirit of friendship and support this local football club has offered Warrington over the years and the Torch of Hope depicted in the statue, remains the club’s symbol as an ambassador of peace.  This symbol of looking forward is based at Crewe Park, however it was on display in Warrington for the 20th Anniversary of the bombing.   I hope by having this statue on public display that everyone will be inspired to respect others and embrace peace.”

Alderman Tinsley added: “Sport can bridge the divide, creating bonds that can never be broken.  The friendship developed between Lisburn and Warrington has ensured that something positive could be salvaged from such a tragic event.  I pay tribute to everybody involved in making this happen over the last 25 years.”