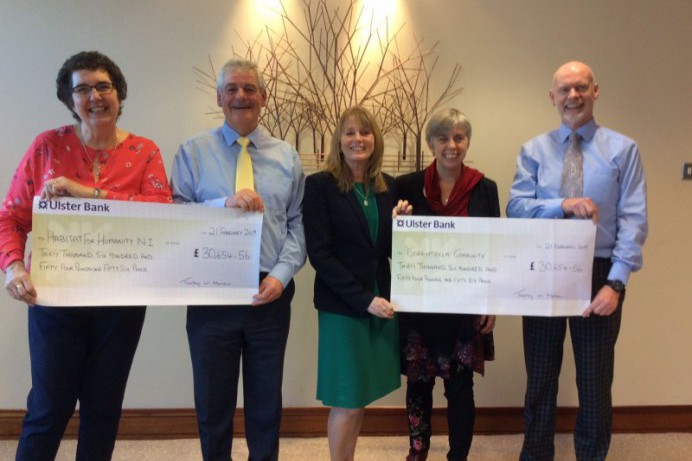 Former Mayor Raises over £61,000 for his two Charities

Former Mayor of Lisburn & Castlereagh City Council, Councillor Tim Morrow raised £61,339.12 during his mayoral term.  This will be split equally between his two chosen charities, Habitat for Humanity NI and the Corrymeela Community.

Habitat for Humanity NI brings people together to build homes, communities and hope and The Corrymeela Community, is Northern Ireland’s oldest peace and reconciliation organisation.

The total amount raised, as a result of a number of fundraising events and initiatives during Councillor Morrow’s term in office.

Councillor Morrow said: “I would like to thank everyone who supported the wide variety of fundraising events held during my term as Mayor of Lisburn & Castlereagh City Council. I am absolutely delighted with the amount raised for the charities I chose which reflect the cross-community interest of my family.

The money raised will help these charities continue their work to break down social, economic and religious barriers. I wish Habitat for Humanity NI and the Corrymeela Community every success in their work making a difference to people’s lives.”

Jenny Williams, Habitat for Humanity added: “We are so thankful that Tim chose to support Habitat’s work and appreciate the many people across LCCC area who fundraised or donated. The funds will make an enormous difference, helping local people improve their homes at low cost, empowering people of all ages and background to learn new skills though Habitat ReStore and enabling vulnerable people sustain their tenancies by helping them make their house a home through our ‘House to Home’ programme.”

Kevin McCaughan, Corrymeela Community said: “In a world of instability and growing uncertainty young people continue to battle with mental health problems, people of all ages are the victims of bullying and abuse, individuals and families are living with the overwhelming grief of loss, refugee  families are beginning lives in a world that is strange if not indeed somewhat intimidation.  Your donations will play an important role in helping Corrymeela give critical support to vulnerable people like these.’’