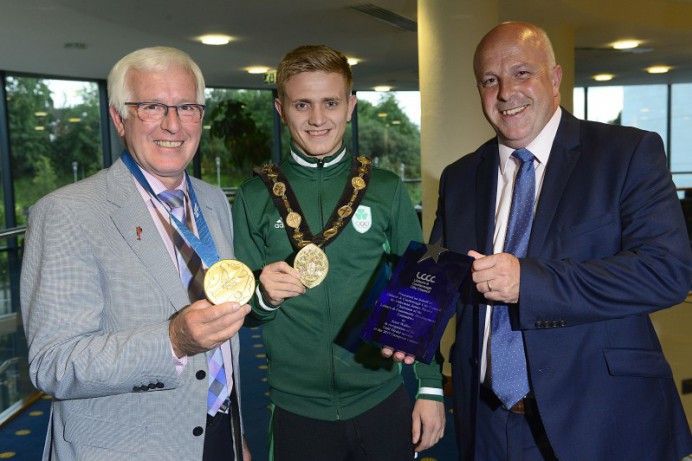 Alderman James Tinsley as Chair of the Leisure and Community Development Committee hosted the reception and said:

“It is a fantastic achievement for Kurt to be the only member of Team Ireland to win a Gold medal.  His family and coaches must be very proud of him; and this medal is Kurt’s ideal preparation for the upcoming World Championships.  On his way to gold Kurt beat the number 1 and number 2 seeds both of whom had defeated him previously.  Kurt has given himself a fantastic platform to push for Olympic glory.”

The evening also included recognition of the Clubs’ coaches as well as members who have worked with and been inspired by Kurt as they progress up the boxing ladder.

The Mayor Councillor Alan Givan added: “It’s a credit to this committed but small local club to have the talent in boxers and coaches to produce champions of this quality.  Winning gold speaks volumes about Kurt’s dedication and ability and I have no doubt he will be an inspiration for younger club members.”

Kurt was presented with a memento of the occasion at the end of the reception.