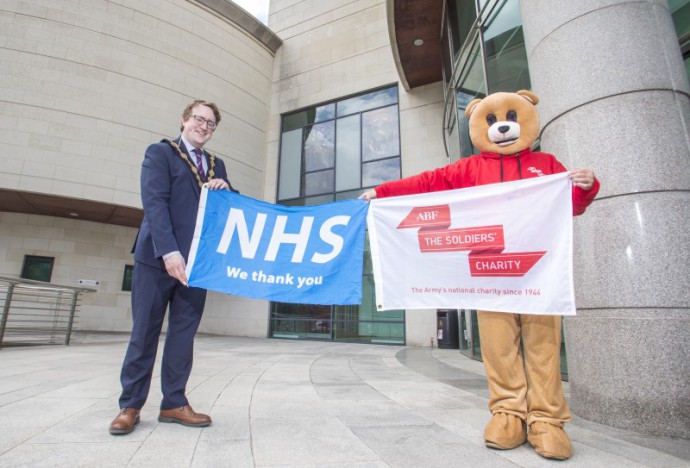 LISBURN based Army Veteran, Irwin Edgar recently completed a gruelling 690 mile Charity Hike in aid of ABF The Soldiers’ Charity and the NHS.  Recreating the distance from Helen’s Tower in Co Down to the Ulster Tower at the Somme, he made his efforts more memorable by being dressed as giant teddy bear!  Irwin said, “I think it’s important to remember the heroes of yesteryear as well as those of today.  I’ve designed this hike to honour the sacrifice and courage of the 36th (Ulster) Division and to raise funds for our NHS charities and ABF to support those soldiers and veterans who might be struggling today.”  So far, Irwin has raised almost £4000 and a further £1000 has been raised by fellow veteran, Michael McConkey.

Receiving the hikers at Lisburn’s Island Civic Centre, Mayor, Cllr Nicholas Trimble said, “One of the joys of being Mayor of a Garrison Town, is that I get to meet a good many of our service personnel and veterans. Meeting Irwin on the last leg of his journey was truly inspiring and it was great to see so many people out accompanying and supporting him. He has already raised a lot of money for very worthy causes and I would encourage everyone to support him, if they can.”

Irwin’s hike finished at Wallace Park, where he crossed the line in the presence of Deputy Mayor Cllr Jenny Palmer and a large group of cheering supporters.  A well-deserved foot spa was next on his agenda!  Anyone wishing to contribute can visit www.justgiving.com/crowdfunding/irwin-edgar-abfandnhs