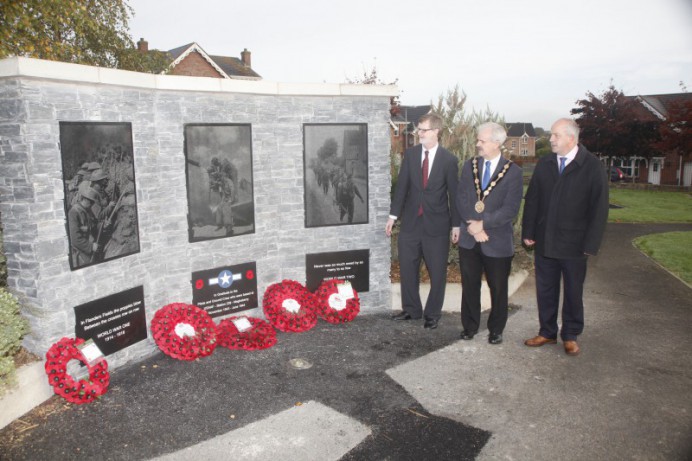 Alderman James Tinsley led a short service in September at Maghaberry Village Green to World War One, World War Two and American Air Force personnel with a strong attendance at this event from members of the local veteran and Maghaberry communities.

Speaking about the Consul General visit, Alderman Tinsley said: “The Mayor and I were delighted to meet Dan Lawton in Maghaberry and show him the recently installed commemorative stones that ensure that the memories of those who sacrificed their lives for others do not disappear into history like the former Maghaberry Airfield.  It was a privilege to walk him through the work undertaken by the Council and the local community to acknowledge the important role Maghaberry played in the two World Wars.”

The Consul General was delighted by the recognition of the strong connection between the US Air Force and this local village in particular when American fighter planes and Flying Fortress Bombers took off to provide support to the British and European Troops as they fought side by side in the battle against Germany.

Mr Lawton then took the time to visit Maghaberry Community Centre, which is the hub of this village on the outskirts of Lisburn.  Tracy Crothers, the Centre Manager showed him the wall display, which depicts the history of Maghaberry Airfield.  This was followed by a visit to Maghaberry Primary School and the P7 pupils were delighted that the US Consul General took the time to chat with them and hear about their contribution to the memorial service in September.

“The US Consul General was very complimentary of the work undertaken by the local community in support of the Council initiative to place a memorial in the village to remember those who sacrificed their lives fighting for the freedom of others,” concluded Alderman Tinsley.

Mr Dan Lawton also visited the other classes in Maghaberry Primary School and met with the Principal Mr Graham Gault and the Chairman of the Board of Governors Mr John Watson.

Mr Gault added: “The pupils in the school really appreciated Mr Lawton's visit, as he called in to the classrooms and chatted with the children.  The Year 7 children, in particular, were very interested to hear about the role of the American Consul General and were very grateful that he talked so openly with them.  Mr Lawton very kindly donated some books to the school, which have already proven to be very popular.”