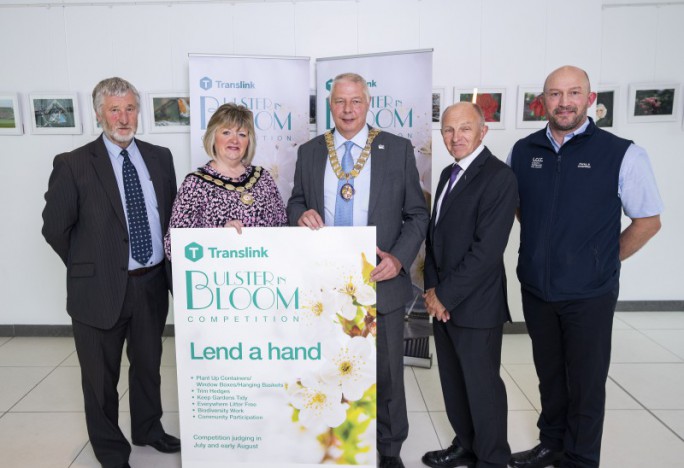 Community gardening enthusiasts from cities, towns and villages across Northern Ireland have been getting their fingers green once again as the 2022 Translink Ulster in Bloom awards were launched this week at The Braid, Ballymena.

The much-anticipated horticultural, community and environmental awards which are held each year in partnership with Translink and the Northern Ireland Local Government Association (NILGA), recognise the work carried out by community groups, volunteers, council teams and Translink staff, bringing people together to clean up local beauty spots and create areas for people to enjoy nature.

Commenting on the launch of this year’s competition, Translink Chairman Dr Michael Wardlow said: “At Translink we’re committed to helping create a cleaner, greener world and delivering services to communities across Northern Ireland. We’re proud to continue our support of Ulster in Bloom which each year further illustrates the wonderful community spirit that exists in our local cities, towns and villages.

“As Northern Ireland’s public transport provider, servicing communities large and small, it’s fantastic to see the time and dedication of volunteers, council workers and local groups. It’s also great to see sustainability and biodiversity become such a major element in the displays and green areas created as part of Ulster in Bloom, which the groups can be so proud of.”

Speaking at the launch event, NILGA Vice-President, Cllr Frances Burton, said: “I’m delighted to be here with you all today and must initially express our gratitude and congratulations to everyone who participates and contributes to the Translink Ulster in Bloom Competition.

"As your Local Government Association, NILGA represents, promotes and champions local government on behalf of all councils. With the ongoing support of the councils and our sponsors Translink, the competition is going from strength to strength, improving the quality of life for citizens right across the region, while also enhancing our cities, towns, and villages.

“For everyone involved, Translink Ulster in Bloom celebrates the successes that can be achieved when we all come together to take pride in the places where we live and work, and together, create a better environment for everyone to enjoy”.

The Ken Powles Community Champion Award will celebrate someone whose longstanding ‘Ulster in Bloom’ contribution has made a lasting and positive difference to their local area - a gardening enthusiast with a passion and dedication to create and maintain attractive plant and floral displays while supporting the local environment, someone who stands out and goes that extra mile to make their area blossom. It’s always a popular award and we’re very much looking forward to receiving entries.

If you’re interested in getting involved in the Translink Ulster in Bloom, contact Amy McGrath at a.mcgrath@nilga.org