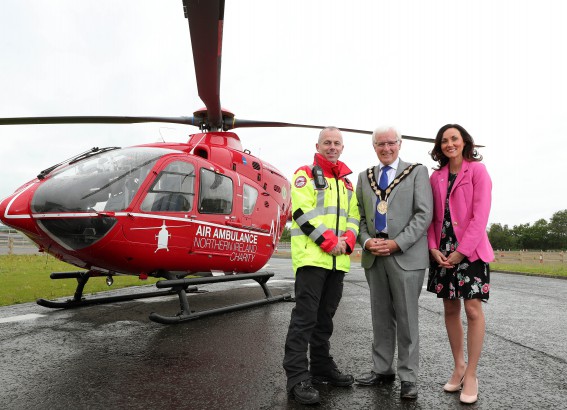 The Mayor, Councillor Alan Givan has announced his Mayoral Charity as the Air Ambulance for Northern Ireland,

Established in 2017, the charity provides the Helicopter Emergency Medical Service for the whole of Northern Ireland, in partnership with Northern Ireland Ambulance Service. From its base in Lisburn, the service can reach any location in NI within 25 minutes to deliver critical medical care in emergency situations.

This rapid response service is vital in delivering critical pre-hospital care at the scene of major trauma resulting from a range of incidents including road traffic collision, agricultural accidents, falls, sporting, domestic and workplace incidents.

The air ambulance is crewed with a pilot, a paramedic and a doctor. The service is in use on average once every day and has been tasked on over 800 occasions to date. To continue to operate, the service requires £2 million a year (or £5,500 a day), which must be raised through donations.

The Mayor’s Office will be organising and hosting a wide range of fundraising events for AANI and urges local residents and businesses to support the charity for any fundraising activity being organised in the local community.

If you are interested in helping with fund-raising for the Air Ambulance for Northern Ireland or contributing to the Mayor’s Charity please contact the Mayor’s Secretary on T: 028 9250 9331 or email mayor’s.secretary@lisburncastlereagh.gov.uk

More information on the Air Ambulance for Northern Ireland can also be found at www.airambulanceni.org